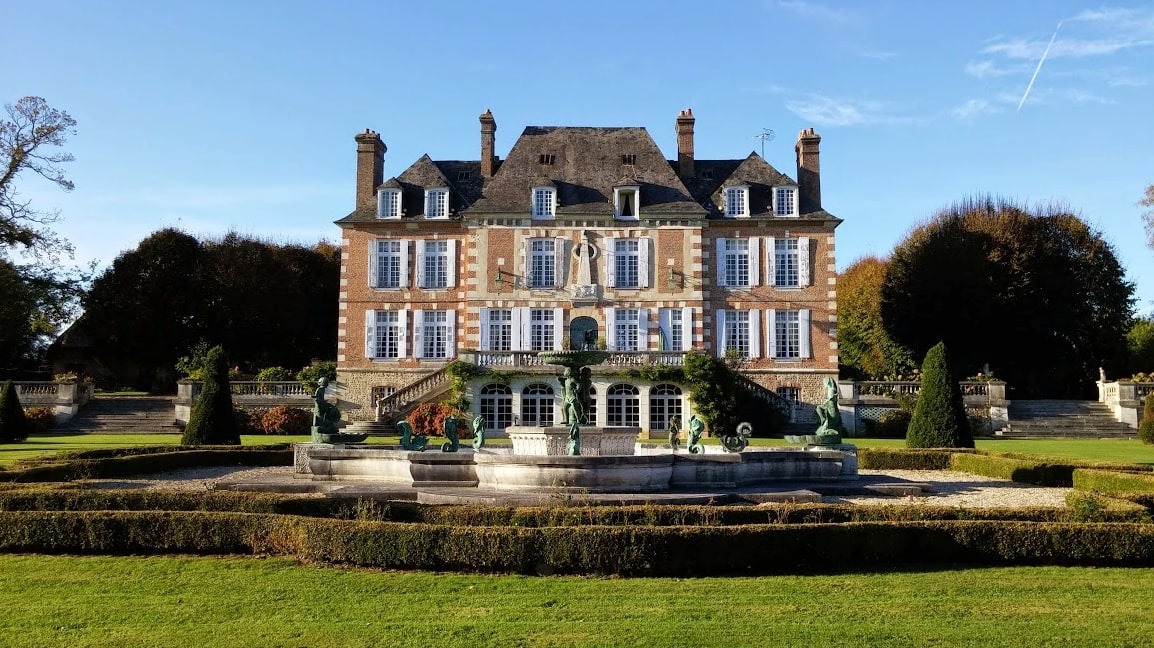 An 18th Century estate in Normandy, near the seaside towns of Honfleur and Deauville and under two hours from Paris and its airports. A great location for the races or exploring this historic area and beautiful beaches.

The estate consists of 50 hectares of land – consisting of gardens, woods, orchards and farmland – and is on the edge of a small village and close to a market town. The main building is the chateau, which was built in about 1641 and extended in 1726. In addition, there is a range of independent buildings built in the 17th and early 18th century. Some of these, like the Château, are built in brick and stone, whilst others are oak-frame buildings typical of Normandy.

The house was completely restored about 40 years ago to the highest standards, when the current floor plans were established and the marble and parquet floors laid. However, since then there has been a thorough update of the estate including luxurious redecoration, the restoration of the farmhouse and stable-block and the construction of a large swimming pool. The estate now provides first class accommodation and facilities. The Château is in the heart of the estate and is surrounded by traditional Norman buildings that are dotted around the gardens including The Pool House and the Farm.

The Pool House is a beautiful, traditional barn which was fully restored in 2004 to create a function room with large kitchen, beautiful galleried hall and two shower rooms. The hall is 14 metres long and can seat 28 people for dinner and two shower rooms. It has windows opening to the pool which is heated and functional from June to September inclusive. Upstairs is the spa area.

The Farmhouse was also fully restored in 2004 and now provides accommodation for up to ten people. It has its own entrance drive from the public road and is surrounded by grazing land and orchards. The Château and Farmhouse can be rented together or separately.

The gardens are spectacular in the summer with hundreds of hydrangeas and roses. They consist of six main areas:

The outer avenue which stretches from the public (old Roman from Paris to Pont L’Eveque) road to the main gates with a single row of beech trees on each side. The inner avenue is between the main gates and the Château and has a double row of lime trees on each side. It is also bounded on the west side by a carriage house that is used as a workshop and for storing machinery.

The formal garden is to the rear of the Château and is bounded to the south by the chapel (dated 1724) and the pavilion. The Italian garden consists of a croquet lawn and six seating areas with tables, two of which are “outside” rooms – an ideal place for a cocktail or for tea. The Orchard is bounded by the Estate Manager’s House, the Children’s House (originally a goat house and now used for storage) and the Pool House.   Most of the trees in the orchard were replanted 12 years ago – mainly apple but with a pear tree, walnut, fig trees and a mulberry. The wood lies beyond the formal garden and orchard with a path leading down to a disused single track railway line. You cross the line and descend to the bottom of the valley where there is a stream that comes from the old Château laundry (lavoir). Here there is a path which takes you through the wood, up a slope and into a field where the Farmhouse is.

28 if both properties taken together:
Chateau sleeps 16-18
Farmhouse sleeps 10

Back to region page

“I visited this house on a day trip from London and it was well worth the drive.   A very charming dolls house of a Chateau with the farmhouse the other side of the hedges. Lots of traditional features and a super pool house and facilities. A lovely couple look after the estate and will make sure you thoroughly enjoy your stay”.